Can anyone remember Marine Le Pen utilizing her woman card against the white, straight, cisgender male in Emmanuel Macron?

Or Theresa May employing similar tactics against Jeremy Corbyn?

Or has any popular female conservative commentator, be they Miranda Devine, Rita Panahi or Lauren Southern, ever used their genitalia to justify their own political agendas?

Of course not, as conservative women prove capable of standing the rigours of genuine debate, and do not require such simple, childish attacks to succeed in their arguments. 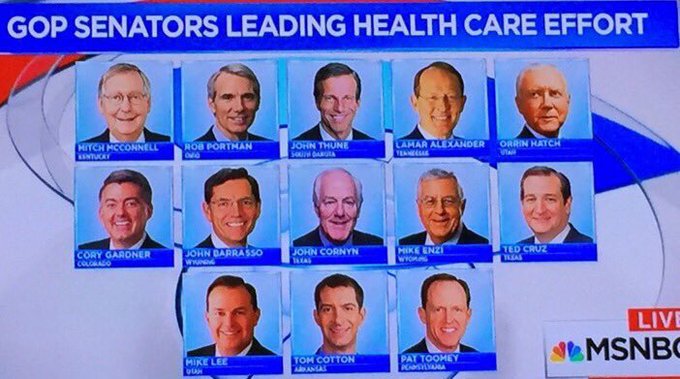 Here are the Republicans that wrote the senate #HealthcareBill. Very. White. Men.

Shocker! Milano seems to believe the GOP’s health care bill is bad by virtue of the fact that it was written by white men.

@Alyssa_Milano White men…..you mean like Ossoff? His male whiteness didn’t bother you. But, then, that didn’t fit your agenda at the moment, did it.

Milano subscribes to the progressive philosophy that one’s gender or skin color determines the areas of public policy to which one should be confined. Those without the proper “identity” are not allowed to craft legislation or advocate policy that would impact individuals outside their personal demographic … unless, of course, those people are white progressives, like Jon Ossoff, and Jonathan Gruber.

Don’t know Gruber? He was the chief architect of the Affordable Care Act, and he is a Very. White. Man. However, he’s a progressive, so the rules of identity don’t apply.

White male progressives can do whatever they want because they care deeply for people. White male Republicans are racist, sexist, homophobic, xenophobic bigots who only ever act in their own interest. As such, it’s simply not possible that the GOP health care bill is a disaster because of its contents. It’s a disaster because it was written by white men with R’s next to their names.